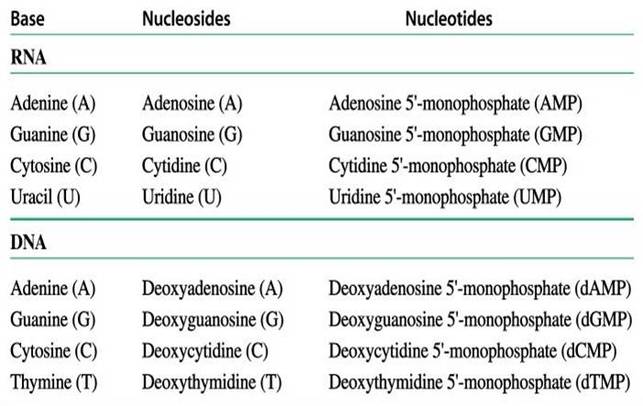 HISTORY OF NUCLEIC ACID
_4. Richard Altman ( (1852 – 1900)) :Altmann is credited for coining the term "nucleic acid", in exchange for Friedrich Miescher's (1844-1895) nuclein, when it was demonstrated that nuclein had acidic properties.
FORMATION OF DINUCLEOTIDE AND POLYNUCLEOTIDE
NUCLEIC ACID
DNA: HISTORY
1. PHOEBUS  LEVENE: Phoebus Levene (1869-1940) had discovered that the cell nucleus contains two types of nucleic acids - DNA and RNA. He also found that DNA contained the four bases, deoxyribose, and a phosphate group.
2. ERWIN CHARGAFF
In 1950, Erwin Chargaff published a paper stating that in DNA of any given species, the ratio of adenine to thymine is equal, as is the ratio of cytosine to guanine. This is known as Chargaff's ratios and it was a crucial clue that helped solve the structure of DNA. Chargaff's ratios are universal: all forms of life obey this rule. Only the balance of A-T pairs and C-G pairs varies between species.
3. ROSALIND FRANKLIN
Rosalind Franklin and Raymond Gosling obtained this X-ray diffraction pattern, which triggered the idea that DNA was a helix.
She produced the X-ray crystallography pictures of DNA which Watson and Crick used to determine the structure of double-stranded DNA.
Biography : Rosalind Elsie Franklin (1920-1958)
4. WATSON AND CRICK
James D. Watson and Francis Crick were the two co-discoverers of the structure of DNA in 1953. They used x-ray diffraction data collected by Rosalind Franklin and proposed the double helix or spiral staircase structure of the DNA molecule.
WATSON AND CRICK MODEL OF DNA
In 1953, J.D. Watson and F.H.C. Crick proposed a precise three dimensional model of DNA structure based on model building studies,
base composition and X-ray diffraction studies. This model is popularly known as the DNA double helix.
Online activity: DNA
FUNCTIONS OF DNA
RNA : RIBONUCLEIC ACID
TYPES OF RNA
FUNCTIONS OF RNA
DIFFERENCES BETWEEN DNA & RNA
Why is DNA  called an acid, especially since it contains a ‘base’ and doesn’t appear to have any dissociating hydrogen?