Organs involved in respiration;
mechanism of pulmonary gas exchange;
breathing process should be explained showing the action of diaphragm and intercostal muscles,
regulation of respiration;
transport of oxygen in the blood, oxyhaemoglobin dissociation curve;
transport of CO2; chloride shift,
disorders of respiratory system such as - asthma, emphysema, occupational respiratory disorders.

Respiration and types of respiration 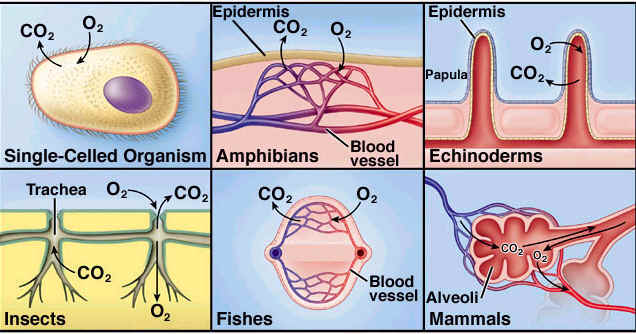 The parts of the respiratory tract

Functions of the nasal passage

Lung and its membrane

WHAT HAPPENS IF WE BREATHE IN PURE OXYGEN?  FIND OUT

Dead space - The volume of gas taken into the lungs, which does not contribute to gaseous exchange.

The dorsal respiratory group is responsible for the basic rhythm of breathing. The neurons of this group emit bursts of impulses that signal the diaphragm and other inspiratory muscles to contract.

The impulses of each burst begin weakly, increase in strength for about two seconds, and cease abruptly. The breathing muscles that contract in response to the impulses cause the volume of air entering the lungs to increase steadily. The neurons remain inactive while expiration occurs passively, and then they emit another burst of inspiratory impulses so that the inspiration-expiration cycle is repeated.

The ventral respiratory group is quiescent during normal breathing. However, when more forceful breathing is necessary, the neurons in this group generate impulses that increase inspiratory movements.

There are chemosensistive areas within the respiratory center. These areas are located in the ventral portion of the medulla oblongata near the origins of the vagus nerves. They are very sensitive to changes in the blood concentrations of carbon dioxide and hydrogen ions. Thus, if the concentration of carbon dioxide or hydrogen ion rises, the chemosensitive areas signal the respiratory center, and the rate and depth of breathing are increased. Then, as a result of increase breathing rate, more carbon dioxide is lost in exhaled air, the blood concentrations of these substances are reduced, and the breathing rate decreases.

Low blood oxygen seems to have little direct effect on the chemosensitive areas associated with the respiratory center. Instead, changes in the blood oxygen concentration are sensed by chemoreceptors in specialized structures called the carotid and aortic bodies, which are located in walls of certain large arteries (the carotid arteries and the aorta) in the neck and thorax. When these receptors are stimulated, impulses are transmitted to the respiratory center, and the breathing rate is increased. However, this mechanism is usually not triggered until the blood oxygen concentration reaches a very low level; thus, oxygen seems to play only a minor role in the control of normal respiration.

An inflation reflex helps to regulate the depth of breathing. This reflex occurs when stretch receptors in the visceral pleura, bronchioles, and alveoli are stimulated as result of lung tissues being overstretched. The sensory impulses of this reflex travel via the vagus nerves to the pneumotaxic area of the respiratory center and cause the duration of inspiratory movements to shorten. This action prevents over inflation of the lungs during forceful breathing.

THE ADAPTATION OF ALVEOLUS AND GAS EXCHANGE

Transport of Carbon di oxide
Carbon di oxide is transported in three forms:
1. As simple solution dissolved in the plasma.
2. As bicarbonate – CO2 reacts with water to form carbonic acid, catalysed by carbonate anhydrase.
Carbonic acid dissociates into bicarbonates and hydrogen ions.
Hydrogen ions are picked up by proteins, some of the bicarbonate ions remain in the RBC whereas some comes out in the plasma. Chloride ions move in, this is called chloride shift or Hamburger shift.
3. As carbaminohaemoglobin about 30% CO2 loosely combines with the globin part of deoxyhaemoglobin