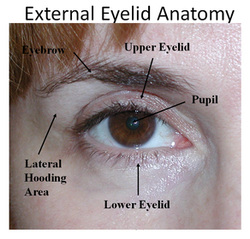 EYE AS SEEN FROM OUTSIDE

Parts of the eye

The wall of the eye ball is formed of three coats-
1. Fibrous coat- It is the thick outer coat that protects the eye and maintains the shape. It has two parts-
2. Vascular coat or Uvea: It is the middle coat of the eye that is incomplete anteriorly and divided into three parts-
3. Neurosensory layer or retina: It is the thin, innermost layer with photoreceptor cells. It consists of three parts-
The ciliary body and the iris is formed partly form the choroid and partly from the retina.

THE TRICHROMATIC THEORY OF COLOUR VISION
The trichromatic theory of colour vision explains how humans are able to view different colours.
According to this theory, there are three types of cone cells which are stimulated by different wavelengths of visible light. These are erythrolabs for red colour, cyanolabs for blue colour and chlorolabs for green colour.

The lens is solid, circular, transparent and biconvex structure that lies behind the iris.
The lens is an organ that, remarkably, retains all its cells for the lifetime of the organism.
It is enclosed in its collagen capsule and is bathed in fluids and so is completely avascular.
The eye lens contain a single family of proteins called crystallins.

THE CAVITIES OF THE EYE

ACCOMODATION OF THE EYE

It is the ability of the eye to adjust focal length of the lens to make clear image of the objects located at varying distances. This is achieved by the by changing the convexity of the lens. The ciliary body and the suspensory ligaments work together and form the accomodation apparatus.

DEFECTS OF THE EYE

Cataract is the opacity of the lens due to physical trauma, radiation, high glucose concentration in aqueous humor of diabetic patients, or age
FUNCTIONING OF THE EYE
Human eye is sensitive to light wave lengths varying form  360 to 760 nanometres. The eye has two functional parts : dioptric or focusing part and receptor part.
1. Focusing Part : Cornea, conjuctiva, lens, aqueous humour and vitreous humour all together act as small lenses and reflect the light rays to focus on the photoreceptors of retina. So, these collectively form the focusing part of eye.
2. Receptor Part : It comprises the retina. The image formed by the retina is inverted and smaller than the object. It converts the energy of specific wavelengths into sensory impulses of nerve fibres. These impulses are carried by the optic nerve to the visual areas of cerebral hemispheres were these are analysed and coordinated so that animal becomes aware of the normal erect pattern of the object.

THE WORKING-
Light reflected from an object enters the through the pupil. Iris controls the amount of light passing through by controlling the size of the pupil. The rays of light converge as they pass through the aqueous humor, lens and viterous humor and finally focus on the retina. the image formed on the retina is an inverted image of the object. The inverted image is picked up by the optic nerve which takes it to the brain (occipital lobe). An upright image of this then perceived by the individual.