The fusion of haploid male gametes and female gametes to form zygote is called fertilisation. In humans the fertilisation is internal and takes place in the proximal part of the fallopian tube. The process of fertilisation involves different stages-
5. Cortical reaction
Due to this acrosomal reaction the plasma membrane of the sperm fuses with the plasma membrane of the secondary oocyte so that the contents of the sperm enter the oocyte. After fusing of sperm with egg membrane, cortical granules release chemicals into the perivitelline space that harden the zona pellucida. This prevents polyspermy.

The chorionic cells of the placenta secrete a hormone - human chorionic gonadotropin (HCG). It carries out the following function-Progesterone is required to maintain the endometrial lining and causes it to grow during pregnancy. By the 16th week, placenta starts producing progesterone and the CL regresses.

It is a temporary organ formed in the placental mammals that is derived from two different individuals. It is an intimate connection between the foetus and the mother.
There are large finger like projections called villi. The uterine wall that in contact with the villi forms depressions called crypts.
The part of the placenta contributed by the foetal membrane of the foetus is called foetal placenta and the part contributed by the mother's uterine wall is the maternal placenta.
In the placenta the foetal blood comes in close contact with maternal blood that facilitates the exchange of materials.
Functions of placenta- 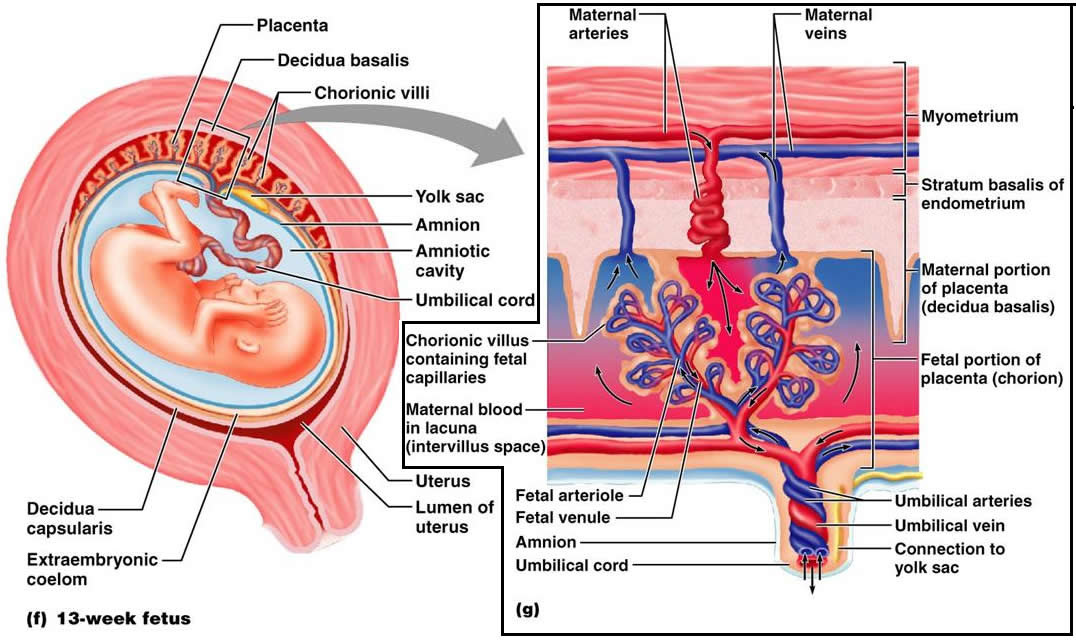 The act of expelling the foetus after a complete term of pregnancy or gestation.
The gestation period is completed in 280 days.
Parturition involves forceful muscular contractions called labor.
The head of the foetus settles down into the pelvic cavity two weeks before birth. When gestation is completed, labor starts and the foetus is expelled out.
The onset of labor commences with the rupture of the amniotic sac and leakage of the amniotic fluid. 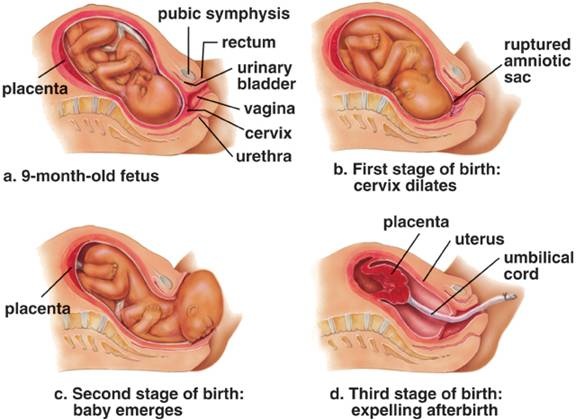 Role of hormones in parturition

The hormone Oxytocin causes contractions during parturition.
The hormone Relaxin secreted by the placenta relaxes the cervix and pelvic ligaments for easy birth. (Relaxin is also secreted by the corpus luteum in non pregnant females)

Role of hormones in lactation

Normally a human female gives birth to one child at a time. However at times two or more babies are born.
Such babies are called twins or multiple births.
Twins can develop in two ways-
Monozygotic or identical twins- arise from single egg.
Dizygotic or fraternal twins- two eggs fertilised by two different sperms.