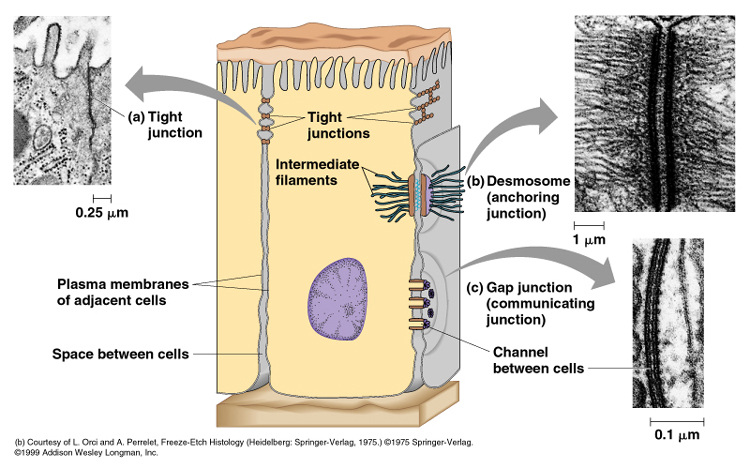 Cell junctions are found in eukaryotic animal cells. They are found on the cell membrane.
To provide mechanical support for the tissue plasma membrane of adjacent epithelial cells modified to form following structures -
→ Tight junctions (Zonula occludens) : help to prevent substances from leaking across the tissue. Plasma membranes in the apical parts become tightly packed together or are even fused.
→ Interdigitations : These are interfitting, finger like processes of the cell membranes of the adjacent cells.
→ Intercellular Bridges : These are minute projections that arise from adjacent cell membrances. They make contact with one anther.
→ Gap Junctions : Facilitate the cells to communicate with each other by connecting the cytoplasm of adjoining cells, for rapid transfer of ions, small molecules and sometimes big molecules.
→ Intermediate Junctions (= Zonula adherens) : These usually occur just below tight junctions. The intercellular space at these places contains a clear, low electron density fluid. There is a dense plaque like structure on cytoplasmic side of each plasma membrane from which fine microfilaments of actin (protein) extend into the cytoplasm. There is no intercellular filaments between the adjacent cell membranes. There is an adhesive material at this point. They probably serve anchoring functions.
→ Desmosomes ( =Macula adherens) : Perform cementing to keep the neighbouring cells together. These are like zonula adherens but are thicker and stronger and are disc like junctions. They have intercellular protein. The plaque-like structures (= protein plate) are much thicker. The microfilaments
which extend from microfilaments are called tonofibrils. Desmosomes serve anchoring function.
Hemidesmosomes (single sided desmosomes) are similar to desmosomes, but the thickening of cell membrane is seen only on one side. Hemidesmosomes join epithelial cells to basal lamina (outer layerof basement membrane).

Types of epithelium
These are classified on the basis of shape and number of layers. 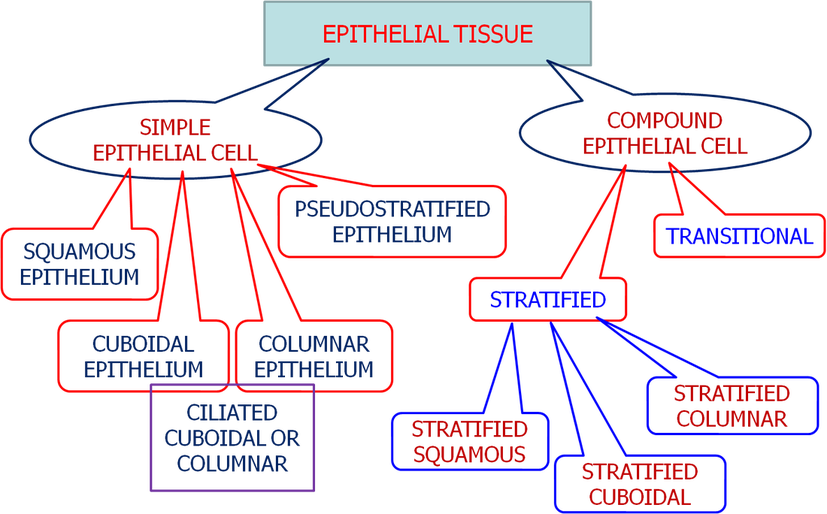 Epithelium on the basis of shape

Squamous cells appear like thin, flat plates/scales.
They have horizontal flattened, elliptical nuclei because of the thin flattened form of the cell.
Location
They form the lining of cavities such as the mouth, blood vessels, heart and lungs and make up the outer layers of the skin.
Function-
A single layer of flat cells which forms a thin boundary of tissue that easily allows materials to diffuse through it, such as is found in the alveolar sacs in the lungs, where the exchange of CO2 and O2 occur. It is also associated with excretion, protection and secretion

Cuboidal cells are roughly square or cuboidal in shape. Each cell has a spherical nucleus in the centre.
Location:
Cuboidal epithelium is found in glands and in the lining of the kidney tubules as well as in the ducts of the glands. It is found in peripheral region of ovary & seminiferous tubules in Testis.
Function-
In gonads this epithelium is also called as Germinal epithelium (testis & ovaries) where cuboidal cells divide to form egg & sperm.
In the kidney these cells excrete the waste products of cell metabolism and reabsorb any needed materials from urine before it's excreted.

Columnar epithelial cells are elongated and column-shaped. The nuclei are elongated and are usually located near the base of the cells.
Location
Columnar epithelium forms the lining of the stomach and intestines. Some columnar cells are specialised for sensory reception such as in the nose, ears and the taste buds of the tongue. Goblet cells (unicellular glands) are found between the columnar epithelial cells of the duodenum.
Function-
They secrete mucus or slime, a lubricating substance which keeps the surface smooth. This tissue lines the intestine, producing digestive enzymes and absorbing digested nutrients by diffusion, active transport, or facilitated diffusion. Columnar cells with microvilli increases surface area for absorption.

If the columnar or cuboidal cells bear cilia on their free surface they are called ciliated epithelium.
Location
They are mainly present in the inner surface of hollow organs like bronchioles and fallopian tubes.
Function
Their function is to move particles or mucus in a specific direction over the epithelium.

It consists of more than one layer of cells. since it has more than one layer it provides protection to underlying tissues against mechanical, chemical or thermal stress.  Stratified epithelia are normally found in places where there is a great deal of wear and tear. Frequently, the outer surface of these epithelia is sloughed off and replaced by cells below it. Thus, the deeper layers of such epithelia (those nearest the basement membrane) are mitotically active.

Glands are specialised cells that give out specific secretions. There are basically two types of glands-

The exocrine glands can be classified on the basis of-

When the secretory units are branched it is called compound gland. 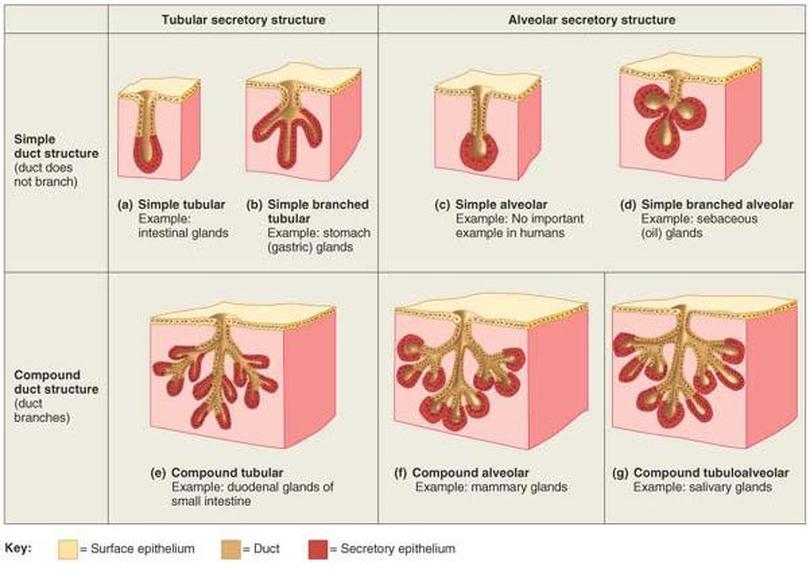