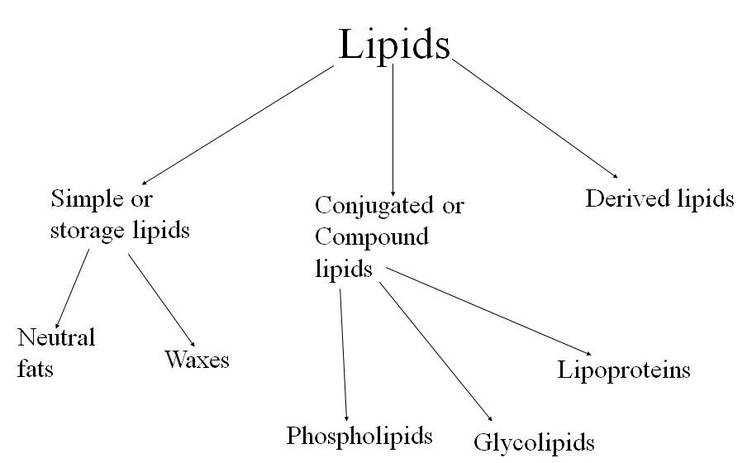 A. SIMPLE LIPIDS : 1. NEUTRAL FATS OR TRUE FATS
These are esters of fatty acids with various alcohols.
Composition
Fat molecule is composed of 1 molecule of glycerol and 1-3 molecules of fatty acids. 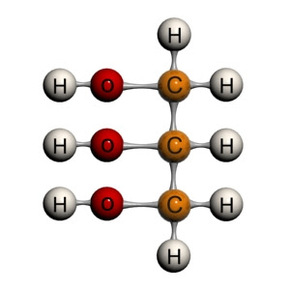 Structure of triglycerides or simple fat
Triglycerides are simple lipids in which glycerol backbone is esterified with three fatty acids.

Simple (Pure) and mixed fats
A. SIMPLE LIPIDS : 2. WAX
Waxes Serve as Energy Stores and Water Repellents
Biological waxes are esters of long-chain (C14 to C36) saturated and unsaturated fatty acids with long-chain (C16 to C30) alcohols.
Their melting points (60 to 100 C) are generally higher than those of triacylglycerides.
Examples of biological waxes:Biological waxes find a variety of applications:
B. CONJUGATED LIPIDS :
These are esters of fatty acids with alcohol, but it contains extra groups in addition to alcohol and a fatty acid. on the basis of this additional group conjugated lipids can be further classified as follows:
1. PHOSPHOLIPIDS
Phosphoglycerides, are membrane lipids in which two fatty acids are attached in ester linkage to the first and second carbons of glycerol,
and a highly polar or charged group is attached through a phosphodiester linkage to the third carbon.
2. GLYCOLIPIDS
Complex lipids with one or more simple sugars, with long chain fatty acids or alcohols.
Examples:
a) Cerebrosides : White matter of brain cells and myelin sheath of nerve.
b) Gangliosides : Grey matter of the brain.
3. LIPOPROTEINS
C. DERIVED LIPIDS :
This class includes a large variety of highly lipid-like compounds or compounds derived from the intermediates of lipid metabolism.
These compounds can be classified into two main groups or categories.
A) Terpenes (Isoprenoids)
B) Icosanoids
A) Terpenes or Isoprenoids:
Steroids:
B. Icosanoids
These are of following three types.
1)  Prostaglandins :
Functions:
2) Thromboxanes :
3) Leucotrienes
FUNCTIONS OF LIPIDS