Jacob Henle formulated the germ theory of disease and outlined the procedure that demonstrating that various microbial species causes particular disease. However, this was proved experimentally later by Robert Koch. Koch proved that a particular microorganism caused a specific disease, thus establishing a set of criterias. This is called as Koch's postulates-
There are four postulates

Barriers to invasion by pathogens

Second line of defence or Internal defence
Internal or second line of defence is carried out when the pathogen manages to break the first line of defence.
The second line of defence is carried out by -
1. Leucocytes (WBC)
Leucocytes especially the neutrophils engulf the invading microbes by the process of phagocytosis.
2. Macrophages-
These are phagocytic cells located in the tissues, lymph nodes, spleen and lining of blood vessels. These macrophages are of two types-
Wandering macrophages are found in the connective tissues throughout the body.
Fixed macrophages are located in the spleen, lymph nodes, liver and bone marrow.
These two macrophages together form the reticulo-endothelial system. Like the leucocytes these cells also help in disposing off the microbes and also remove the tissue debris and the dead cells.
3. Mast cells
These cells are found scattered in the connective tissue throughout the body near the blood vessels. These cells release histamine and serotonin that increase the permeability of the blood vessels and cause local oedema. They also secrete heparin which is an anticoagulant.
4. Inflammatory reaction
The micro-organisms that enter the body produce toxic substances that kill tissue cells. These cells release histamine that causes inflammation. The capillaries dilate and become more permeable which causes swelling and redness in the area. Phagocytes move to this area engulfing the microbes. This is termed as inflammatory reaction.
5. Fever
During acute inflammation- some pathogens invoke a multi-factorial tissue response.
The inflammation can be restricted locally only to the specific area called as local inflammation.
When the inflammation spreads all over the body it is called systemic inflammation. WBC count increases.
Pyrogens released by the WBCs and toxins produced by the pathogens cause regulation of body temperature.

IMMUNE SYSTEM AND THE IMMUNE RESPONSE

Mechanism of action of antibodies

Antibody not only binds to a bacteria, but cannot destroy them.
They tag the antigens which are then destroyed by other mechanisms- Effector mechanisms.
Mechanism of action

T cells contain specialized antibody-like receptors that see fragments of antigens on the surfaces of infected or cancerous cells. They are unable to recognise the free floating antigens. T cells contribute to immune defences in two main ways:
1. Some cells direct and regulate immune responses, these are Helper T cells
Helper T cells, or Th cells, work by communicating with other cells.
Some of these cells stimulate nearby B cells to produce antibodies, some others stimulate the microbe-gobbling cells called phagocytes, and still others activate other T cells.
More information on B cells and T cells
HOW DOES THE HUMAN BODY PROTECT ITSELF FROM INFECTION?

The ability of an organism to resist the development of a disease or the effect likely to be produced by the entry of foreign organisms.
A person may develop immunity by-
1. Through disease- when a person gets infected by a disease for the first time the he suffers from the disease and produces the antibodies.  For e.g. Chicken pox or mumps. However the next time the antibodies are already present hence the person does not suffer from the disease.
2. Antitoxins- during infection, toxins enter the body. Antibodies that neutralize these toxins are antitoxins. These are now prepared artificially like the antitoxin for snake venom.
3. Vaccination- A process by which immunity is gained without suffering from disease. Vaccines are dead or weakened pathogens. These are injected in the body to make the body immune against a particular pathogen. The pathogens that are injected into the body are not capable of developing a disease, however they stimulate an immune response and produces antibodies. Thus the person gains immunity against a particular disease without contacting the disease.

Innate or inborn or natural Immunity

The immunity inherited by an organism from the mother that protects the person for lifetime. For e.g. human beings have immunity against distemper a disease of dogs.

Passive immunity is acquired when the body receives antibodies that are formed in some other organism. This can be in the form of serum. This type of immunity lasts only for a short period, even though it provides immediate relief. Natural form of this is antibodies entering from the mother’s first milk.

This is a type of abnormality in the form of a response where the individual develops antibodies against his own antigens. Autoimmunity involves attacking of body's own cells instead of foreign cells. It depends on the self antigen involved, if it is against the RBC, all the RBCs are destroyed leading to chronic anaemia.
This type of diseases are called autoimmune diseases.

Immunodeficiency disorders
Severe combined immunodeficiency (SCID)
T and B cells are absent, the individual is born without B cells and T cells.
Thus the patient is susceptible to even minor infections.
Children with SCID are kept in germ free ‘isolation suits’ 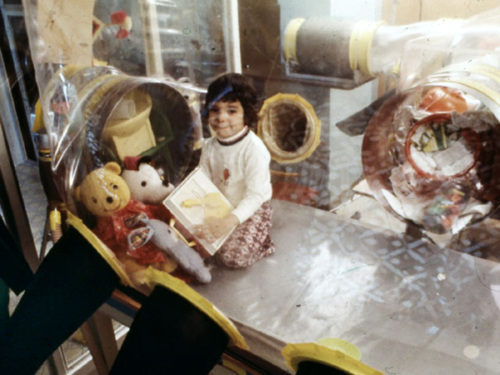 A child suffering from SCID in an isolation suit.

AIDS is caused by a reterovirus, Human Immunodeficiency Virus. These virus infect the T cells and can remain there for 6 months to 5 years. They convert this cell  into a cell producing HIV. Thus these cells are unable to stimulate B cells for production of antibodies.
Individuals then develop Aids Related Complexes (ARC).
This virus is found in body fluids like blood and semen. This a highly contagious disease.
The virus was first isolated by Dr. Luc -Montagnier.

Modes of transmission of AIDS.

AIDS is spread by the following ways-
1. Sexual intercourse- HIV is found in semen and vaginal fluid. This can be transmitted from man to woman or woman to man.
2. Blood and blood components- transfusion of HIV contaiminated blood.
3. Shared needles- Sharing needles and syringes, or using of instruments like ear peircing or tatoo needles.
4. Mother to child- Woman infected with HIV may pass it to her child by breast feeding.
5. Organ transplant and artificial insemination.

Symptoms, treatment and control of AIDS

Symptoms may begin with simple fever, cough, slight but recurring diahorrea, rashes on the skin. Some may develop lung infection or cancer that affects the skin and lining of blood vessels. AIDS has a long incubation period, however once it develops, there is a rapid decline in the health of the person and can lead to death of the individual.

Treatment- There is no cure for the AIDS till date. Azidothymidine is a drug that prolongs the life of the AID

Interferons discovered by Alick Isaacs and Jean Lindermann.
When a cell is infected with viruses, it produces a protein  this is called as interferon.
These are body’s first line of defence against viruses.
These are species specific and can interfere with the replication of viruses.
It brings about an “anti viral state”.

Replacement of diseased tissues or organs by healthy ones is called transplantation. Due the advances in surgery transplantation has become a common reality.  However there are limitations to this, as the body rejects the transplanted tissue or organ and an immune response is triggered.

Allografts are less successful than autografts. In autografts there is no rejection.

For allografts, tissue matching is done to ensure that there is no rejection.

Immunosuppression- The suppression of a part of immune system that is triggered by transplanted organ while the rest of the immune system may remain active to fight other invaders.

Immunosuppressants are drugs that are suppress the immune system temporarily, to prevent rejection of transplant.

These cells have the capacity to self renew by cell division and to differentiate. At an early stage the whole of a human embryo consists of stem cells, but gradually the cells in the embryo become committed to differentiating in a particular way.

Juvenile onset diabetes can be treated by transplanting pancreas tissue from donors after the death. However, the supply is limited. Stem cells have had success with bone marrow transplants. Hematopoietic stem cell, normally found in the bone marrow, divide to produce new cells that differentiate into RBC and WBC.

These cells are used in the treatment of variety of blood disorders like leukemia, SCID, multiple myeloma and lymphoma.